View all the shopping centres
Wolverhampton 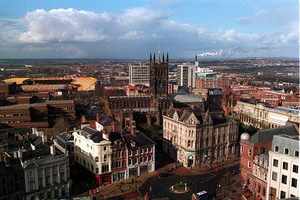 Founded as far back as 985 AD, Wolverhampton has grown over the years from a small market town to a major industrial centre in the Victorian period. Presently it is considered one of the major retail centres in the West Midlands.

Wolverhampton has a number of famous former residents in the music industry, including the bands Slade and Cornershop. Liam Payne of One Direction fame was also born and raised in the city (cue adoring screams). The biggest outdoor music venue is the Wolverhampton Civic Hall which hosts a variety of music and arts events and is complemented by the Wulfrun Hall venue, the second biggest in the city. The largest theatre in the city is the Grand Theatre, situated on Lichfield Street. For cinema goers the city hosts two main cinemas: the large Cineworld showing all the latest big releases (as well as a number of Bollywood features), and the Light House Media Centre which offers older and foreign language films. For art lovers the number one destination has to be the Wolverhampton Art Gallery which holds the biggest pop art collection in the country after the Tate. The city's football club, Wolverhampton Wanderers are one of the oldest clubs in the UK.

The city has two covered shopping centres. The Mander Centre is recently refurbished and hosts a number of big high street names, including New Look, BHS and TJ Hughes. The smaller Wulfrun Centre is located in the city centre and is another top destination for shoppers, with top retailers such as Primark, Argos and Early Learning Centre. On the outskirts of town you will find St. John's Retail Park which boasts a number of large home and garden stores, including Curry's, Homebase and a whopping Next flagship store. Market lovers can go on the hunt for anything and everything at the Wolverhampton Market. The Market Square in the city centre and the indoor market on Salop Street host over 100 traders and you really can buy anything: traditional and exotic goods, confectionary and fabric. As well as all that, the market has a specialist food hall where you can find a fantastic selection of fresh produce, poultry and cheese. For those looking for something unique and with a little bit of history behind it, the Wolverhampton market also has a section dedicated to antiques. What more could a shopaholic ask for?