What offers can I find in Nottingham?

Find the best discounts offered by your favourite shops in Nottingham on Tiendeo. See the flyers from Argos, Aldi, Lidl and don't miss out on any online discounts. Here on Tiendeo, we currently have 418 active catalogues in Nottingham and 2380 shops.

View all the shopping centres
Nottingham 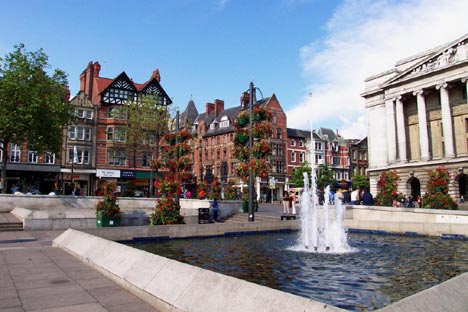 You can't mention Nottingham without a shout out to its most famous (and most probably fictional) resident: Robin Hood. And although we may not enjoy roaming Sherwood Forest with a band of merry men as much as he did, we do rather enjoy his 'steal from the rich to give to the poor' philosophy. So let's see what Nottingham has to offer, for rich and poor alike.

With a population of just over 300,000, Nottingham is a relatively small city which nonetheless boasts a vibrant arts and culture scene, as well as being considered a centre for sport with the National Ice Centre, the National Water Sports Centre and two league football teams, the most famous of which being Nottingham Forest FC. It has two universities, a number of theatres including the Nottingham Playhouse and the Theatre Royal, as well as a huge array of galleries and museums. Of course two of the biggest attractions are Nottingham Castle and Sherwood Forest, central to the Robin Hood legend.

Nottingham has two main shopping centres: the Victoria Centre and The Broadmarsh, which both house the usual high street favorites such as Boots, Gap and Republic. Other smaller shopping centres include The Exchange Arcade and the Flying House Walk. For a more unique shopping experience head to the Bridlesmith Gate area which is home to an array of independent and designer stores, most famously the original Paul Smith Boutique. The smaller side streets such as Poultry Walk, Hurts Yard and Derby Road (once famous destinations for antique shopping) are often home to interesting independent shops. Lovers of a good old fashioned market should head to the Sneinton Market and the adjoining Hockley Arts Market, which acts as a platform for local artists and designers to showcase their wares.

You can find Home & Furniture decoration products such as chairs, tables and shelves at excellent prices at Søstrene Grene.