What offers can I find in Camden?

Find the best discounts offered by your favourite shops in Camden on Tiendeo. See the flyers from Argos, Aldi, Lidl and don't miss out on any online discounts. Here on Tiendeo, we currently have 568 active catalogues in Camden and 14961 shops. 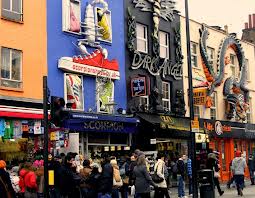 Camden is one of London´s most exciting and vibrant boroughs. Situated just north of King´s Cross, over the years it has shed its former grimy image to become one of the capital´s most fashionable hotspots.

At its heart lies Camden Town, home of Camden Market, which actually refers to several markets.  Each market has its own character, from crafts and curiosities of Camden Lock Village to the Stables Market for all things unconventional.  As the fourth most visited place in London, each weekend Camden comes into its own with over 100,000 people packing the streets and music, street food and incense filling the air.  Camden is shopping heaven.

Camden also has a thriving live music scene coupled with iconic music venues, and is well associated with alternative culture.

The Electric Ballroom has hosted the likes of Sid Vicious, U2 and the Red Hot Chili Peppers, and KOKO (formerly Camden Palace) was the home of Britpop.  The legendary Roundhouse has seen the likes of Pink Floyd and Jimi Hendrix grace the stage, and The Hawley Arms was an old haunt of the late Amy Winehouse.

Full of hidden treasures, including vintage, independent health food stores, second-hand record and book stores, Camden is a delight not to be missed.